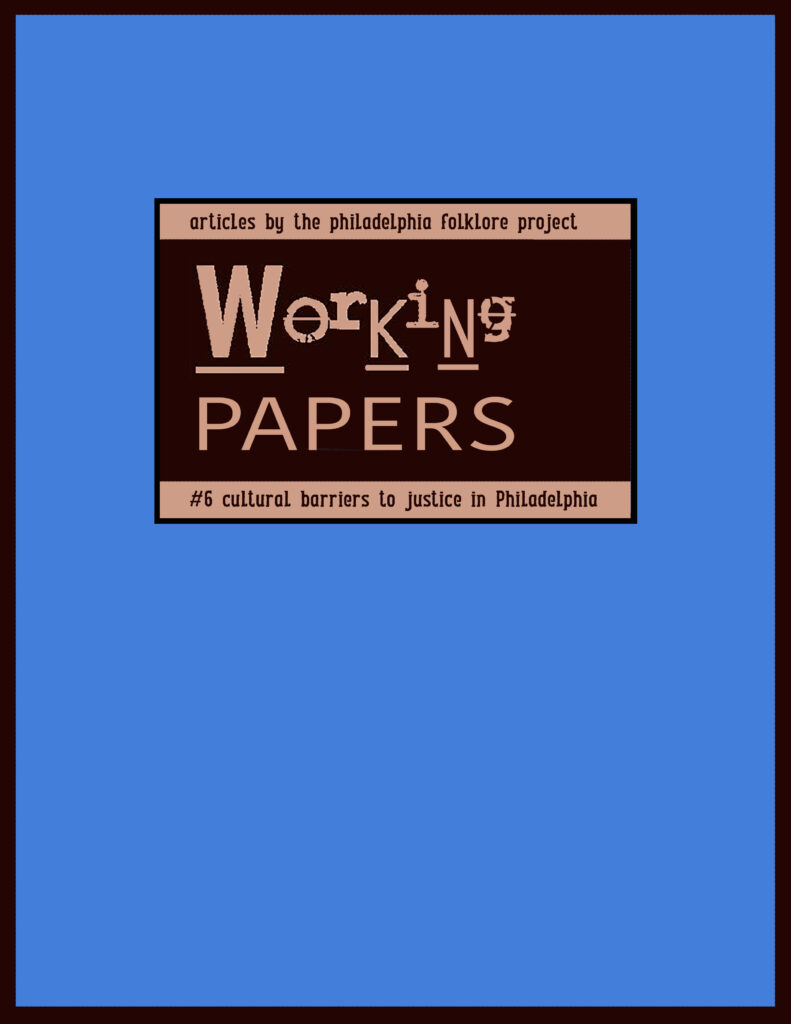 OVERVIEW
Cultural differences are a major factor in determining whether a person or community will have full and equal access to the legal system. Recently, a spate of reports by judicial commissions in Pennsylvania, New Jersey, New York, Iowa, and Florida have begun to address bias and discrimination, particularly against minorities and women, in the courts. Recognizing that such bias exists, and aware additionally that it is not limited to the courtroom or the official channels of the law, the Philadelphia Folklore Project launched an investigation partly funded by the Pennsylvania Humanities Council during the 1992-93 year.

Focusing on Philadelphia, our purpose was 1) to ascertain how cultural differences become barriers to equal access throughout all aspects of the legal system, official and unofficial, and 2) to explore what steps can be taken to begin to open up the legal system to wider access. Legal “consumers”—that is, clients, community members, workers, aggrieved persons, defendants, political refugees, and so on—had expressed to us in a variety of contexts that the legal system simply was not accessible to them. Furthermore, people repeatedly said that, if called upon to defend themselves, they had little recourse to the official channels of legal mediation for protection. As Chris Schweitzer, director of the Kensington Joint Action Council, a community-based organization, noted, “Our system assumes that people are brought up in the system,” with all the cultural familiarity that implies. On the other hand, people’s prior experiences with lawyers and other legal service “providers” demonstrated a true disparity in these providers’ awareness of, and sensitivity to, cultural differences. Those with whom we spoke generally were aware of such differences, and did not assume gender equality, class parity, or the insignificance of cultural differences. But they expressed frustration at the insensitivity of the system, while sometimes feeling at a loss about how to remedy these disparities.

With that in mind, we set out to meet with representatives of several communities concerned and to elicit information on the problems each side faces, in their own words and languages. We did this work from the perspective of a folklife organization, recognizing that both legal providers and consumers rely upon cultural assumptions and beliefs that makes them distinct from people in other neighborhoods, from other backgrounds, in other occupations. This report describes our work, summarizes our findings, and provides policy recommendations.

This report does not imply that the legal system is the only effective means of resolving disputes, but it does concern itself with making improvements in the ways people can make use of different systems—particularly the legal system—available to them to address injustice in their lives. For many, the legal system does not present itself as an accessible means of finding solutions to social and personal problems. Nor is it always engaged voluntarily. As Jules Epstein, a criminal defense attorney and former public defender who served in an advisory capacity on this project, observed, for many groups of people the legal system is far more likely to “ensnare” them than it is to be a resource for social change.

Whether voluntarily entering into the legal process or not, the client is better served when working in tandem with counsel knowledgeable about the issues of concern to the client, and sensitive to the difficulties that the client faces. The client can become an ally in the strategy and investigation of the case, but only when working with an effective lawyer who is aware of the barriers the client is up against. Many of these barriers are not individual; they are cultural—that is, they stem from the client’s (and equally, the lawyer’s) affiliation with a social class, an ethnic group, a nationality, a language, a religion, and a gender. Some of these features will be more prominent than others in a given case, but our contention is that a lawyer who ignores the significance of these features will be doing a disservice—perhaps even an injustice—to the client and the case. Far from being irrelevant, sometimes these features can make the difference, if approached thoughtfully, in the resolution of the case.
In sum, law should be confined neither to those who know the system nor to the workings of the process of dispute. It must incorporate history and language, process in and outside of the courtroom, and especially the beliefs of the individual and of many different cultures and groups within the larger society, about what is accessible, fair, and just.