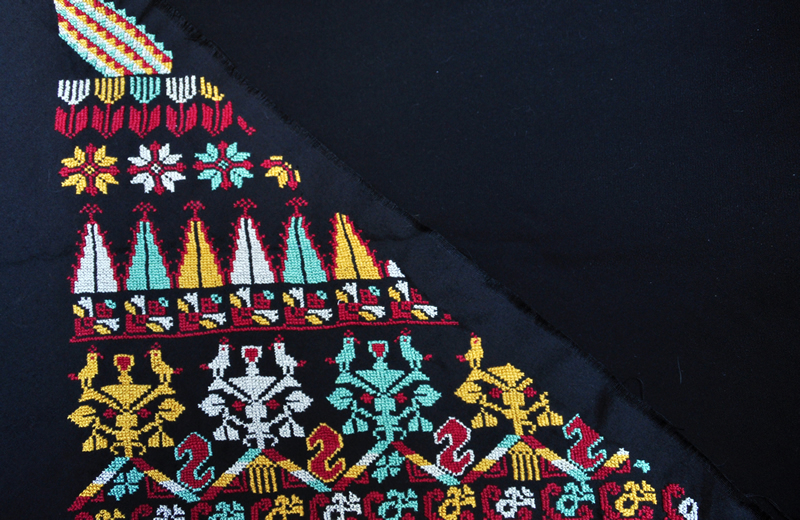 Making and sharing traditional needlework, stitching patterns belonging to villages that no longer exist, local Palestinian women artfully sustain heritage and community through the beauty that is tatreez. Nehad Khader curated this exhibition of the work of 7 local artists. To read exhibition texts and see a sample of images, keep reading (below). Photographs by Sarah Green are included below, and featured in the slideshow sampling Nehad’s documenting of local artists’ work.

I grew up watching my mother, Alia Shiekh-Yousef, stitch patterns into fabric after work and on the weekends. She always found ways of displaying tatreez—on headbands, shawls, and pillows adorning her home. When I was fourteen, I asked her to teach me, and I stitched a wall hanging of the map of Palestine and a peace dove. Later, she asked me to finish some of her work. I was honored. Her stitching was a direct response to the destruction of our villages and homes by Israeli military forces, and to continued attempts to destroy Palestinian identity. It gave me (and I hope that it gives you) a different way to understand who we are.

Since September 11, 2001, my education in tatreez had me thinking about how women in my community– family, neighbors and friends– are commonly represented and seen, and how we might be seen. This exhibit displays the stories and works of seven Palestinian women. It is a reminder of ways that women create beauty, connect to heritage and to one another, and connect to home—including native villages now destroyed and inaccessible. Given the modern American socio-political climate, I hope this exhibit serves to give Palestinian women positive visibility that counters the negative and destructive mainstream images of us.

While my research has been in Palestinian homes in Philadelphia, it has connections in several ways to the broader Palestinian Diaspora. My own dispersed family contributed works tracing their movements. Women’s needlework is kept in family homes here and even more often in Palestine, where women feel free and proud to wear this work and where the work is better appreciated. Women who can no longer can return to a hometown frequently evoke the name of Palestine and its villages in their work, displaying tatreezprominently, showing who they are and where they come from. And in their shared feeling of loss and exile, older women who have skill in needlework fear that they are the last generation who will know and make tatreez; they lament that their daughters have no patience or inclination to sustain the art form. And because tatreez is so meaningful to them, so too was contributing to this project.

The idea of an exhibition with photographs of women and their work was foreign in many ways. Sharing of tatreez is normally not done through a public display like this. It is a matter of personal and community exchange. I am grateful for the women’s generosity in sharing their stories and in making something so important in their lives publicly visible, to the extent that they were willing to do so: Alia Shiekh-Yousef, Ghalia Salahi, Arij Yousef, Umm el Adeeb, Wafa Ajaj, Maisaloon Dias, and Wafai Dias. Photographs are by Sarah Green. 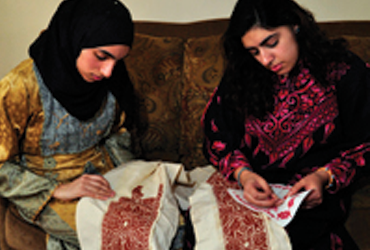