If These Walls Could Talk: The Bill and Miriam Crawford Dining Room 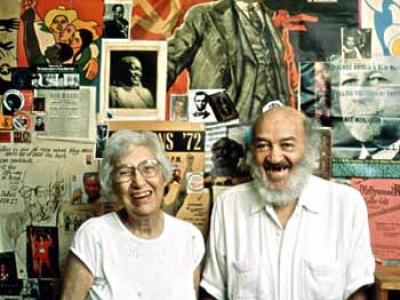 Bill and Miriam Crawford were well-known activists in Philadelphia from the late 1940s. Many people first met Bill when they visited his store, the New World Book Fair at 113 S. 40th Street in West Philadelphia. Open from 1961 to 1974, the store featured Marxist and African American books, serving as an invaluable resource and gathering place for many people interested in progressive cases. The Crawfords’ home was an equally important setting for formal and informal political work.

Bill Crawford began a habit of placing significant memorabilia—posters, handbills, clippings, announcements from campaigns and struggles—on the walls of the family dining room in the Parkside neighborhood of West Philadelphia. Eventually, the dining room was covered with more than 500 items: four walls collaged with 40 years of social change memorabilia. The walls of their dining room chronicle four decades of their political life, as well as four decades of Philadelphia movement history.

Like other folk arts, these lovingly tended walls of memory and struggle trace community and convey folk history. An artistic creation in its own right, this assemblage evokes the homes and workplaces of many activists. The dining room walls record the Crawfords’ involvement in the Communist party, the civil rights, Black Power, and anti-war movements, the “Stop Rizzo” campaign, and Bill’s own campaign for city controller. Like an elaborate, oversized scrapbook, the walls seamlessly mix political memorabilia with favorite images of African American literary and musical figures, popular culture, cartoons, and photographs of old friends. Each piece has a story.

In 1998, when Miriam and Bill were preparing to leave their home, the Folklore Project was doing research for what would be the 1999 exhibition, “Folk Arts of Social Change.” Curator Teresa Jaynes met the Crawfords and began to think about what could be done to preserve the dining room walls. Thanks to help from PFP members and the William Penn Foundation, conservators were hired to painstakingly remove the entire dining room collage, and to preserve it for re-installation in the exhibition.

It was clear, during the brief time that “Folk Arts of Social Change” was on display at the Samuel Fleisher Art Memorial (former home to PFP) that the Crawford’s dining room had meaning for many. Older activists would explain posters to their children and grandchildren. People would argue the significance of particular items. Posters and flyers would spark storytelling.

Now that the PFP has its own home, the Crawford’s dining room has been permanently re-installed, brought back home to West Philadelphia at 735 S. 50th Street (2 short blocks south of the 34 trolley on Baltimore Avenue and 50th, by the Firehouse Farmer’s Market).

This initial installation was opened to the public on April 15, 2005 at a free opening reception from 5pm to 8pm. A documentary video about Bill Crawford, by Louis Massiah, was also screened. An open house was held the following day,April 16, 2005, from 9am to 3pm. Other hours are by appointment.

“If These Walls Could Talk” was made possible thanks to the research and curatorial work of Teresa Jaynes and Nancy Yan. The exhibition was installed by Kim Tieger and Charles Adams. Funding is thanks to the support of the National Endowment for the Arts, the Philadelphia Exhibitions Initiative, the Humanities-in-the-Arts program of the Pennsylvania Humanities Council, and the Pennsylvania Historical and Museum Commission.