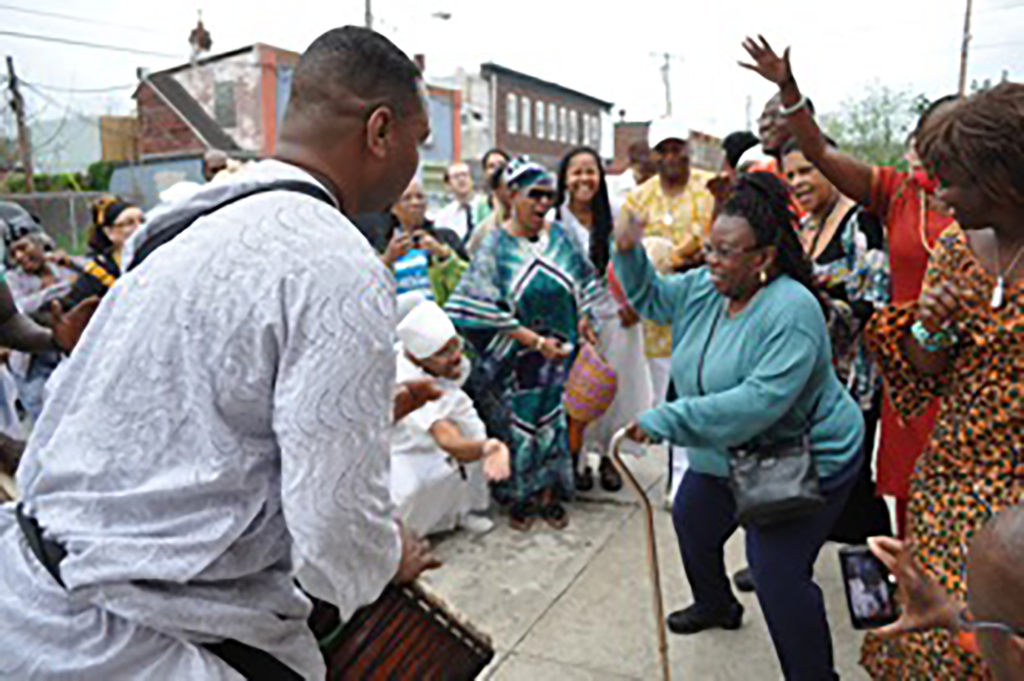 South Fiftieth Street between Baltimore and Florence Avenues in West Philadelphia was the site of a spectacular Egungun procession on November 7th, at 6 PM. In conjunction with the Philadelphia Folklore Project exhibition, Honoring Ancestors, the community was invited to celebrate alongside an Egungun, a masked, costumed figure of West African Yoruba origin, and to move to the rhythms of bata drums. More than 200 people joyfully processed—a fitting beginning to this community-sourced exhibition.

Following the procession, the Philadelphia Folklore Project held a public Open House in its gallery at 735 S. 50th Street to celebrate Honoring Ancestors. The gallery remained open on Tuesdays from 2:00pm to 7:00pm and by appointment. Another Open House and community celebration was planned for March 14, from 6:00pm to 8:00pm. Keepers of the Culture members led attendees in story-sharing about the history on display in the exhibition. Honoring Ancestors paid respect to generations of African American dancers and drummers who contributed to a revolution in cultural expression and consciousness that paved the way for today’s vital and flourishing community of drummers and dancers of African-rooted rhythm and movement.

Honoring Ancestor also celebrates the Community Education Center’s inaugural program: DanceAfrica Philadelphia!—a festival of African dance and drum produced by the CEC and occurring at Drexel University last fall. The exhibition was proposed and developed by the Community Education Center and community members interested in exploring local history and culture, motivated by the passing of a generation of visionary artists.

An altar, fashioned by artists Ira Bond and Nana Korantemaa Ayeboafo to resemble a tree, reached across PFP’s gallery walls, offering space to consider the visionary work and extraordinary generosity of dancers and drummers who have passed: people who devoted their lives to their art and their communities. Attendees were invited to add names to the tree-like altar.

The exhibition drew on interviews, stories, ephemera, images and sounds of teachers, performers and cultural workers to connect the past to Philadelphia’s present-day proliferation and diversity of African continental and diasporan performance traditions, and to suggest the vital relationship between local African arts practice and social and political movements.

Quotations from interviews with artists and others whose ancestors inspired them to engage in cultural and spiritual transformation through movement and music give viewers a perspective on the power of the drum and the dance for individuals and communities. Rare video and audio was also included.

Percussionist Leonard “Doc” Gibbs recalls that, “The drum was a big part of the Movement because when you heard the drum you thought, ‘Africa.'” Dancer Betty Aldridge also talks about the 1960s and 70s: “Hideous things were happening in my own neighborhood of 10th and Dauphin. That’s what Arthur Hall and his African American Dance Company tried to put a stop to. Arthur reached for the teenagers. ‘You don’t have to be following those footsteps to nowhere.'” African dancing and drumming provided alternative paths.

Honoring Ancestors was co-curated by Ira Bond, Nana Korantemaa, Joan Huckstep, Jeannine Osayande, Terri Shockley, and Angela Watson. It was proposed by and undertaken with the Community Education Center. Funding for PFP’s Folk Arts and Social Change residencies is provided by the Pennsylvania Humanities Council, the Philadelphia Cultural Fund, the Samuel Fels Fund, and the National Endowment for the Arts.

Image: Betty Aldrich and others dance as Ira Bond and others drum outside the Philadelphia Folklore Project during the opening reception for Honoring Ancestors. 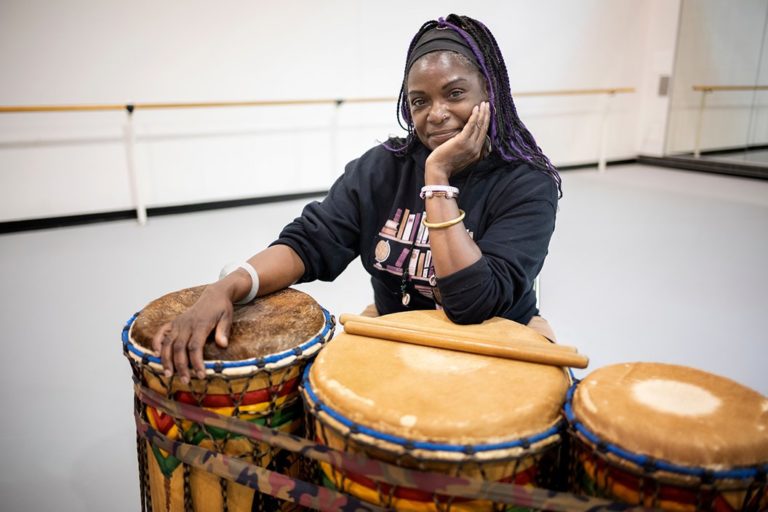