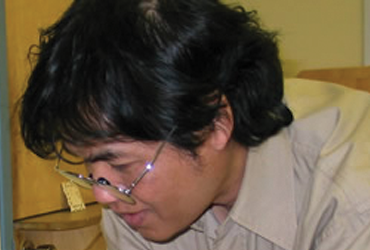 Chamroeun Yin was born in the province of Battambang, Cambodia, in 1957. He received his initial training in Khmer folk arts from his father, a carpenter and cabinetmaker who crafted the ritual furniture and objects needed for weddings and in Buddhist temples, as well as everyday artifacts. His father was a musician, and Mr. Yin developed a knowledge and appreciation of music and dance in these early years.

Through an apprenticeship with a cousin, he became a tailor and dressmaker, crafting Khmer traditional clothes. His talents were further developed in the Khao I Dang refugee camp in Thailand, to which he escaped in 1979. There, he encountered classically trained court musicians and dancers who recruited young people for classes in Cambodian art and culture. Soon he became, in his words, “crazy for dancing.” While other people in the camps worked to earn extra money for food, Mr. Yin spent his days practicing the disciplined art of court dance. What money he earned as a tailor in the camp he spent not on food, but on fabric and materials to make the elaborately beaded dance costumes for the group’s performances.

Mr. Yin came to America as an artistic refugee as part of the Khmer Classical Dance Troupe, which toured the nation to great acclaim in 1981-1982. The troupe settled in the Washington, D.C., area but eventually disbanded as artists had to find ways of making a living. Mr. Yin moved to Philadelphia in 1989. Here he works in several mediums. He is a teang ka (ritual beautician), someone who creates wedding costumes and makes the bride and groom “beautiful like the king and queen.” He teaches Khmer court dance and mask-making to Khmer youth, and performs regularly. He continues to develop his artistry, devising new ways to make items such as dance crowns out of laminated cardboard and papier mâché, which adds to the community’s growing collection of dance costumes.

Through dance, sculpture, choreography, teaching, performances, and weddings, Mr. Yin tries to explore and communicate Cambodian values, creating “movements that show you what is polite or rude, beautiful or ugly.” He dances with passion and delicacy, and with a sense of the importance of keeping alive the fragile threads of Khmer dance tradition: “I dance because I want to keep my culture. I want this dance to stay alive forever in the future.”

Since coming to Philadelphia, Mr. Yin has been recognized by the Pennsylvania Council on the Arts and the Dance Advance program as a master dancer. He has received grants to teach classical Khmer dance to apprentices in the local community and to pursue his own work in both dance and crafts. He has also organized, choreographed, and presented the annual dance performances for the Khmer New Year before audiences of about 500 people. He has performed at LaSalle University, Penn State, Community College of Philadelphia, the Samuel Fleisher Art Memorial, International House, and various community sites. His craftsmanship has been exhibited in exhibitions curated by the Philadelphia Folklore Project, including 1999’s “Folk Arts of Social Change.” In the Folklore Project’s folk arts residency program, he teaches crafts and dance, linked arts of central importance to the Khmer community today. A folk arts curriculum, In My Heart I Am a Dancer, has been developed around his teachings, allowing his culturally rich artistry to reach a broad audience.