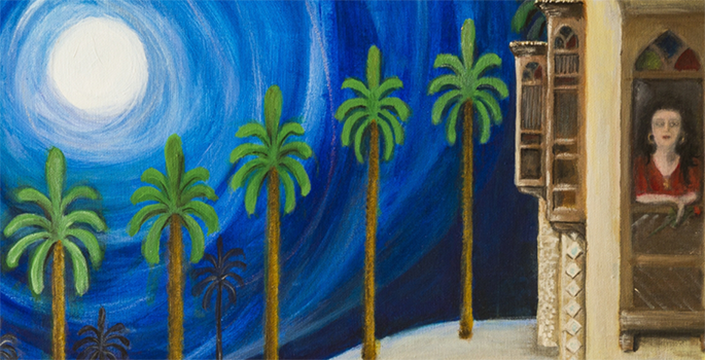 Iraqi painter Mayada Alhumssi uses brilliant colors and images to interpret Iraqi folk songs. Her paintings celebrate and revive her cultural traditions and preserve these songs for the next generation. This exhibition featured a collection of Mayada’s most recent paintings, coupled with the folk song lyrics that inspired her work. 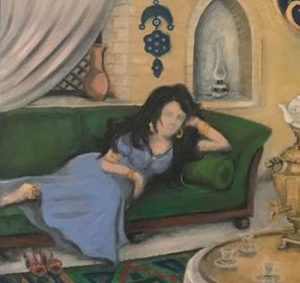 Born in Damascus, Syria, to Iraqi parents, Mayada and her family moved to Iraq when she was very young. From early childhood, she showed a great interest in drawing, and she later graduated from Baghdad University with a Bachelor’s degree in Architectural Engineering. Mayada has confronted war several times in her life. After violence encroached on her neighborhood in 2006 (following the U.S. invasion of Iraq in 2003), Mayada sought refuge in Syria where she began to paint, communicating her love of Baghdad and of Damascus, with street scenes and reflections on Iraqi culture. It became impossible to remain in Syria, where a civil war had flared up and Mayada, her husband and their four children got on the last plane of refugees flying from Damascus to the U.S. Since settling in Philadelphia in 2012, Mayada has worked as a case manager, interpreter and peer educator. She’s also continued as an artist, painting images that introduce the beauty and complexity of Iraq to her new city, and that provide continuity and connections for other Iraqi refugees here through the preservation of valued stories and cultural symbols. A recipient of a Leeway Foundation Art and Change Grant, her work has been included in projects at the University of Pennsylvania Museum of Archeology and The Philadelphia Museum of Art.