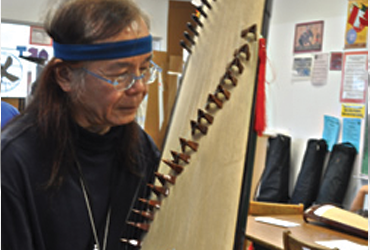 Born and raised in Vietnam, Nhan grew up during a time of political and social upheaval in his country. This era of unrest included war, the separation of Vietnam from French colonial rule, the encroaching influence of US military occupation, and antiwar activism. Music became an outlet that allowed him to communicate his feelings about the surrounding dangers and uncertainties. In Saigon, Nhan was influenced by Vietnamese traditional music, especially the performances by traveling theater troupes. These troupes cultivated his interest in folk songs, folk stories, and folk dances. Later musical influences in his youth included the antiwar folk songs by American artists such as Bob Dylan and Joan Baez. In 1967, on a Leadership Scholarship through USAID, Nhan traveled to the United States, where he studied at San Jose State University and immersed himself in local social justice movements.

Having received his Ph.D in linguistics from New York University in 1984, Nhan is one of very few scholars in the world who can read the ancient Vietnamese Nom Script. His research, as it connects to his musical practices, is grounded in the notion that folk songs illustrate the seamless connection between language, poetry, and music. Nhan says he is struck by the fact that folk songs are “very intelligent, very honest, straight to the point, no skirting around anything.”

As a performing musician, as well as a teaching artist, Nhan has combined the dan tranh (a 16 to 17 string plucked zither tuned to a pentatonic – 5 note – scale) with jazz ensembles, blues music, and even western classical music.